Circumcising newborn boys increases their risk of cot death due to the stress of the procedure - and could explain why it is more common in boys than girls, study finds

Male babies who have their foreskins removed are likely to suffer from the condition, also known as Sudden Infant Death Syndrome (SIDS), due to the stress of the procedure, a UK study found.

Such stress may include bleeding and pain or could be related to the procedure separating the infant from its mother and restraining it to a board.

Researchers believe this may explain why cot death is more common in baby boys than girls.

They wrote: "[Male circumcision], the most common unnecessary surgery in the world, is a major risk-factor for SIDS." 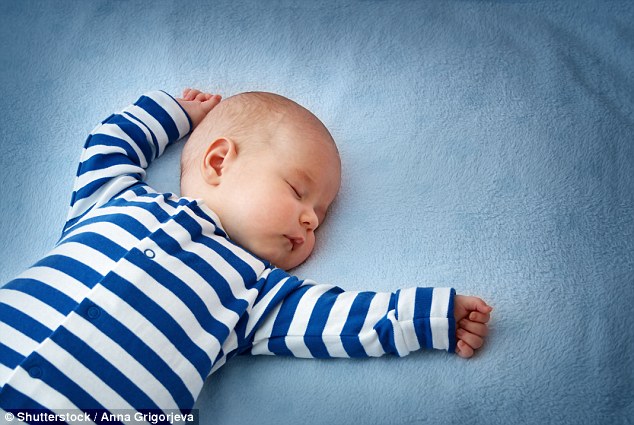 Sudden infant death syndrome (SIDS), or cot death, is the sudden, unexpected and unexplained death of an apparently healthy baby.

It usually occurs within the first six months of an infant"s life and is more common in those born prematurely or of a low birth weight.

The cause of SIDS is unknown, however, it is associated with tobacco smoke, tangled bedding, co-sleeping with parents and breathing obstructions.

Prevent the risk by:

How the research was carried out

Researchers from the University of Sheffield analysed circumcision rates in babies born between 1999 and 2016 in 15 countries and more than 40 US states.

Prematurity data was also collected from the Center for Disease Prevention and Control, as well as the charity March of Dimes Foundation.

The findings were published in the journal bioRxiv.

Results further suggest SIDS rates are significantly lower in US states where Hispanic people make up more than eight per cent of the population. Spanish-speaking countries do not generally circumcise their boys.

In the 22 US states analysed where the health insurance Medicaid covers male circumcision, cot death is significantly higher.

Findings also imply babies born between 24 and 27 weeks, rather than full term at 40 weeks, are three times more likely to die from SIDS.

This may be due to the stress of being hospitalised in intensive care units, or their increased risk of bleeding or complications.

The researchers believe their results should encourage people to avoid male circumcision unless it is medically needed, such as if the foreskin is too tight or is recurrently becoming infected.

Such procedures should also be delayed until the child is at least seven years old, if possible.

The scientists add parents should be informed of circumcision"s SIDS risk.

A doctor has criticised Love Island over a task that saw contestants care for robotic babies. In Wednesday"s episode contestants, such as the now-eliminated Jack and Laura (pictured),  putt their "babies" to bed covered in loose sheets, despite the risk of cot death

The "babies", which were also left in the 34C Majorca heat without hats, frequently had loose sheets covering their mouths, which puts infants at risk of sudden infant death via suffocation

This comes after a scientist from the same university warned the parenting task in Wednesday night"s episode of Love Island could put babies at risk of cot death.

The episode of the ITV2 reality series, which was watched by 2.6 million people, had contestants looking after "infants" that cried, and required changing, feeding and comforting.

When it came time to put the "newborns" to bed, the contestants loosely covered the babies in blankets, which prompted doctors to warn this can cause life-threatening suffocation and strangulation in real life.

Dr Eran Elhaik, who researches cot death at the University of Sheffield, explained to MailOnline that loose sheets are a suffocation hazard and can cause babies to overheat, which both increase the risk of the condition.

He said: "Swaddling an infant helps to soothe them, if done right. Swaddling is done with a sheet that wraps the infant"s body so that they cannot move.

"Done wrong, the infant will move, the sheet will unfold and the sheet and blanket will become a choking hazard.